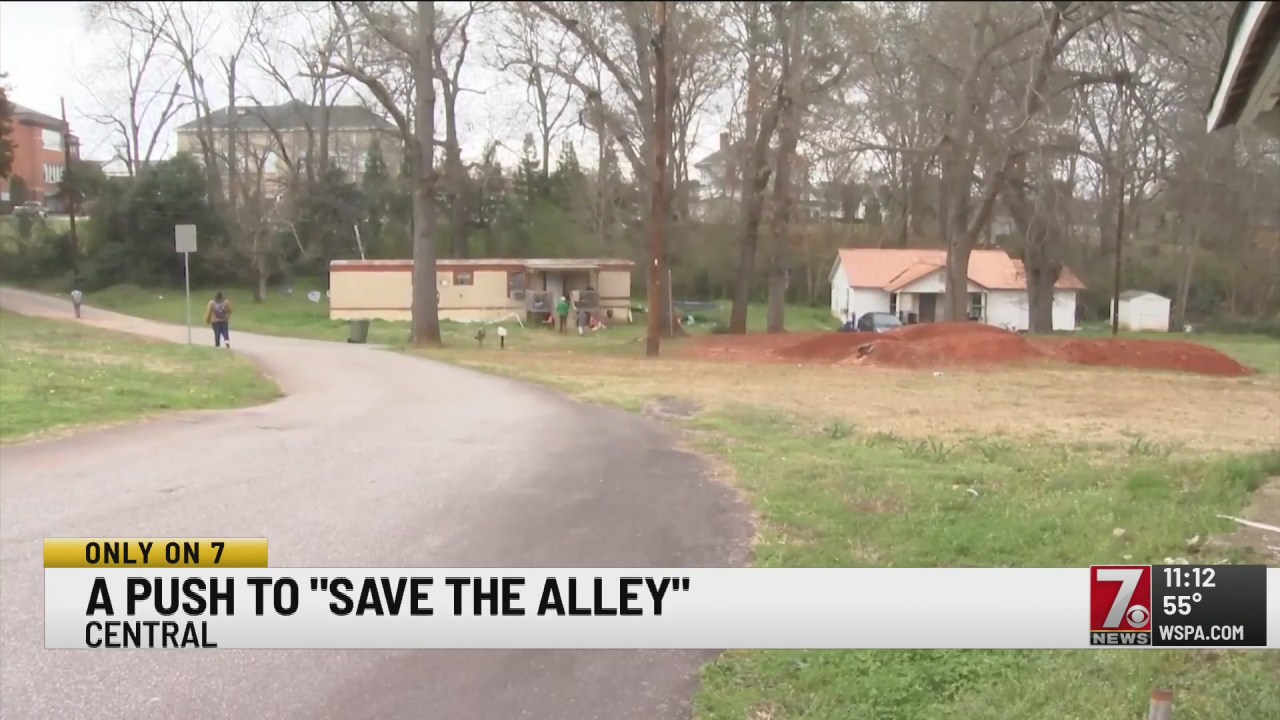 CENTRAL, SC (WSPA) – Groups in the city of Central are working to save an area known as a historically black neighborhood. The area is known as “The Alley”. It’s a place where many people have lived for decades, and now the property is for sale. People said they are now worried about the future.

“First of all, this community is historic. This place is pretty much like their own little town. What we call it, “The Alley,” said Rosa Grayden, community leader and member of the Black Lives Collective (BLM). “The majority of them had gotten college jobs…Clemson University, may I say. They worked as caretakers or cooks or dishwashers, which didn’t automatically pay enough money for them to qualify for food stamps — some of them for food stamps or any government assistance, but they had two or three jobs,” Grayden said. “These people here have helped make Central what it is,” she said.

Some said the neighborhood had a lot of value and a special place in their hearts.

“I see family. I see hard workers,” said Katina Holden, as she looked around the property. “I just see a lot of love and blood and sweat and tears in this area and in this community, and I think they want more than they get,” Holden said. “I wouldn’t want anyone to have to leave just because someone wants to earn an extra dollar,” she said.

Holden is part of BLM, and that group, along with Naturally Occurring Affordable Housing (NOAH), is trying to save what is also known as the Head Town neighborhood.

“There are about 14 households, about 50 people who would be affected. These people have nowhere to go and rent at the same price they currently rent locally, and so our concern has become the displacement of a whole group of people in our city,” said Alysen McCauley, co-founder of BLM. and member of NOAH. “And then when you think about it even more, that’s the most vulnerable population we have here at Central. Lower income. Lots of kids, old people, a single woman,” she said. “We are just afraid that they will be moved. I don’t know where they’ll go, but I’m also afraid of losing what Central is as a city and when you find a historic community that’s been around for 50 to 100 years, you want to preserve it,” McCauley said. .

“We can’t force anyone not to sell and sell no matter what, but understand that you can’t forget your humble beginnings because these people here in this area have increased their wealth and the wealth of the city “, said Grayden.

The owner said he didn’t want anyone moved.

Head said he was 65 and didn’t want to have a rental business as he got older.

“I don’t have the money to develop it properly,” Head said. “I just don’t want to have rental housing at 75,” he said.

Head said an offer was made, but nothing was sold. He said he didn’t know what potential buyers wanted to do with the property. Head said he wanted the city of Central to buy it.

“It wasn’t sold, but I was offered an offer, and I told the people who made me an offer that I wouldn’t sell it until I made the offer to the city,” Head said.

“I grew up in the neighborhood. That’s where I grew up, and I gave it to the city of Central, and they said they didn’t have the money and so on,” Head said. “I don’t know what else to do,” Head said.

“He mentioned the possibility that he would be willing to work with us on the property. We don’t have a formal proposal or documents that we can consider, but without knowing a specific purchase price that’s on paper, that we could review, there really isn’t much to consider without having a type of formal proposal that we can then go to the full council and figure out a way forward,” said Mayor Andrew Beckner of the City of Central.

We asked Mayor Beckner if it was possible for the City of Central to take over the land.

“I think the problem is the role of a town, a small municipality of about 5,000 people – is it the role of the community to own land, own property and rent property, that kind of thing,” says Beckner.

Mayor Beckner said he doesn’t want the residents of that community to be displaced either.

“I can certainly relate and understand the concerns of the community and wish the displacement never happened, and that is certainly not our intention. I can certainly tell you with enough confidence that no one on council wants people to be moved from their homes and would like to do what we can to prevent that from happening,” Mayor Beckner said.

Head said he was in no rush to sell the property.

“I don’t need the money, but I’m not going to wait a year and a half,” Head said.

Community groups hope the neighborhood can be preserved, restored and invested in.

“My hope is that we find a solution to keep these people here, and that we can develop their neighborhood in a natural way. Help them maintain their home. Help them become owners,” McCauley said.

“I hope they understand that they already have affordable housing, they just need to come in here and clean up,” Grayden said. “What I would like to see is that they come in and do restoration, or if it is decided to sell, the City should be responsible for at least three months or six months to find places where residents can go,” she said. noted.

Head said Habitat for Humanity had expressed interest and said he would sell it to them or any group interested in saving this community, but only at the asking price.

Mayor Beckner said there have been conversations with stakeholders about other ways to develop the property, but said there is no formal plan in place for how it will work in a short time.

Beckner said he is ready to listen to any plan and proposal that will save the community, although the City of Central does not currently own the property.