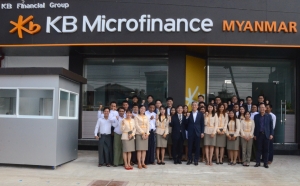 KB Kookmin Bank announced on March 8 that the bank has obtained final approval for the establishment of KB Micro Finance Myanmar (KB Myanmar) from the local financial authorities and will start operating the first branch in Yangon, Myanmar from March 15.

KB Myanmar is the first microfinance company to collaborate with the Myanmar government and NGOs to provide funds for housing improvement and new construction to the low income class with poor residential environments in Myanmar.

KB Kookmin Bank will expand its sales network to the administrative capital Naypyidaw and the second largest economic center in Mandalay, starting with the first branch in Yangon, and establish itself as a leading foreign institution in the microfinance market in Myanmar through the establishment of a nationwide sales network. network in the future.

â€œThe low-income group makes up about 90 percent of Myanmar’s population. There is a high demand for small loans for low-income people,â€ said a KB Kookmin Bank official. â€œKB Myanmar is expected to grow rapidly thanks to Kookmin Bank’s expertise in housing finance and finance. “