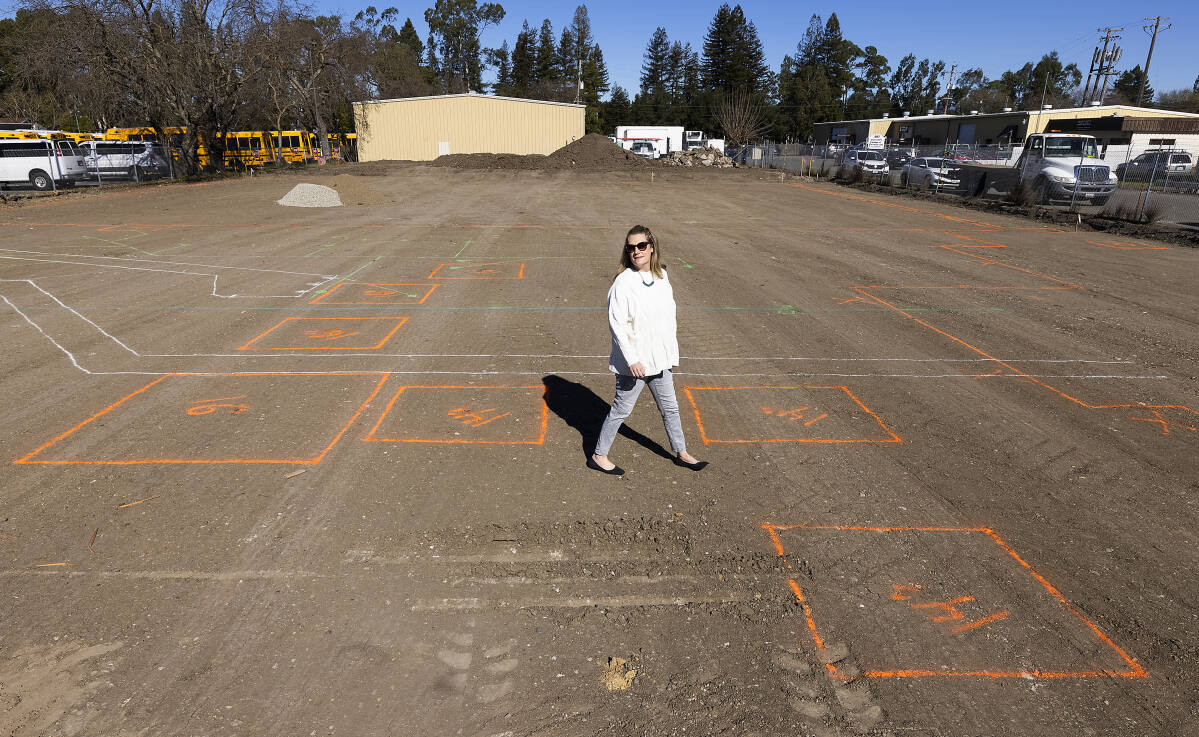 In a large field of dirt opposite Roseland Primary School on Sebastopol Road, a dusty and orange Kubota mini digger was digging holes and trenches on Tuesday for the foundation of what will be the first boys and girls club to be built in Santa Rosa for decades.

Orange, white, and green lines painted on the earth outline the building’s footprint of approximately 25,000 square feet and $17 million. It will include a full-size gym, commercial kitchen, art and science/technology lab, dance studio, teen center and more.

David Bowman, a board member of the umbrella organization Boys & Girls Clubs of Sonoma-Marin, said the project is a long time coming for a community that has been largely neglected for many years.

“It’s a true testament to a community that deserves something,” Bowman said. “It’s something sorely lacking – shame on all of us that we didn’t get something like this in this community much sooner.”

The organization has four other sites in the Roseland neighborhood of Santa Rosa, all on school campuses. It once had a fifth site in a nearby structure that housed COVID-19 testing and vaccinations and was the former site of the Roseland Library.

The completion of this project is still several years away. Bowman said he hopes the new Roseland Boys & Girls Club will also serve as a community center and a gathering place for local residents, who are primarily Latino. While the focus will be on free services for young people, club facilities will be open to people of all ages, he said.

Maria Peñoloza, a mother of three girls – two fourth graders and a first grader – said she relies on the Boys & Girls Club at Sheppard Elementary to watch her children after school while she is at work , cleaning homes and offices. She said her children had been in the program for four years and the staff often helped them with their homework.

“I don’t know what I would do if I didn’t have this club,” she said in Spanish. “I guess I should figure out how to pick up my kids after school, maybe rely on other people while I’m at work. At the club, they are safe. I have nothing but good things to say about their staff.

Boys and Girls Clubs of Sonoma-Marin has 40 locations in Sonoma County, including two dozen in Santa Rosa, serving some 3,000 children daily and about 10,000 children total each year. That’s a significant increase from the 300 children the organization served in three county locations 14 years ago, said Jennifer Weiss, CEO of the group.

On Tuesday, Weiss surveyed the dirt lot, indicating where the various construction facilities would soon materialize. “That’s the entrance, and that’s the dance studio on our left,” she said. “This truck is sitting on the art room.”

The full-size gym will likely operate day and night, and the commercial kitchen will not only serve meals for children but also have enough space to be used as a learning center for nutrition programs, Weiss said.

“There are so many kids to serve, we’re just trying to keep up,” she said.

Weiss said the club needed to raise $10 million to complete construction. The project was launched just before the pandemic in 2019 with a $1,450,000 grant from Sonoma County Vintners, the local business group.

The property was purchased with a $1 million donation from Cindy and Bill Gallaher, whose construction company designed the project and will build it.

The couple also donated another million dollars for the project, and their construction company reduced the cost of construction by $1.65 million, Weiss said.

The Gallahers, the Boys & Girls Club’s biggest backer, in 2021 backed out of a previous promise to pay the full cost of the project, about $16 million at the time, according to club officials.

To raise the $10 million needed for construction, the club has five years – the period of the 1.5% interest loan the organization secured through Santa Rosa-based Poppy Bank, of which Bill Gallaher is the founder and chairman of the board of directors.

“It’s a company that’s been talked about for years,” he said. “Communities like this yearn for things that other communities have.”

The Boys & Girls Clubs of Sonoma-Marin, with annual revenues of approximately $10 million, receives 75% of its funding from federal and state grants supporting after-school services. The other quarter comes from donations and charitable donations, Weiss said.

Weiss said it will be a challenge both to raise the funds needed to repay the building loan and to continue club operations at 40 venues across the county. Much will depend on the local community, she said.

Many families at the club have been hit hard by the pandemic, including disproportionate rates of illness and death in local Latino households, as well as severe economic hardship.

“There are a lot of things adults in the community need to do to try to restore the emotional well-being of the children we serve,” she said.

Department of Defense warns of threat of further consolidation (NYSE:GD)