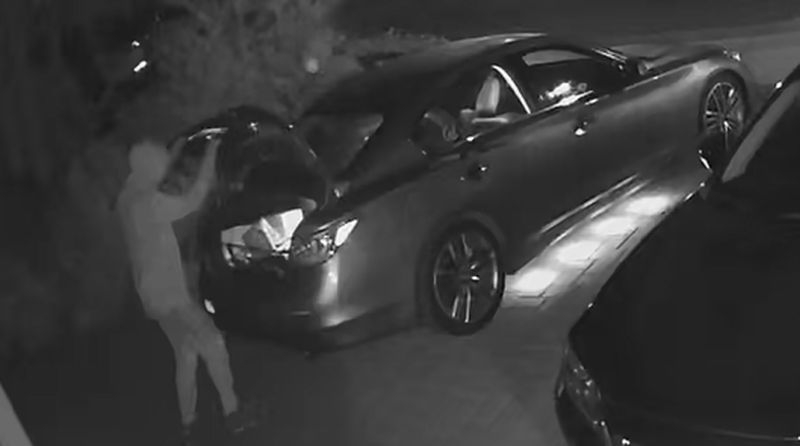 Palo Alto police have arrested one of four young men suspected of stealing vehicles from three south Palo Alto neighborhoods and then shooting a resident who confronted them.

The incidents occurred on January 29 shortly before midnight. A resident of the 3600 block of South Court had noticed lights shining on the street outside his home and had seen several people walking down the street with flashlights. They appeared to be lighting up parked cars and trying to open car doors.

The resident got out to confront them and found a person standing by the open driver’s door of his car in the driveway. He chased the robbers on foot as they ran towards a waiting SUV. The man heard what sounded like a gunshot and thought he saw the bullet impact on the sidewalk in front of him.

He was not hit by the gunfire and never saw the weapon, police said. But officers responding to the resident’s 911 call later located a spent casing from a .40 caliber handgun at the scene and treated it as evidence.

A neighborhood check revealed that at least two other unlocked cars on South Court had been searched. Within the hour, at 12:45 a.m., police received another call from a resident, this one who lived in the 700 block of Talisman Court in the Palo Verde neighborhood. This resident had reviewed CCTV footage and saw that a group of people searched unlocked vehicles at 11:20 p.m.

Detectives conducted a thorough follow-up investigation into the case and were ultimately able to identify the suspects, including three minors, police said in a news release Thursday.

Detectives have developed information to support charging the four with minor theft from a car and conspiracy, but the investigation into which of them had the gun and fired the shot is still ongoing, police said.

The firearm has not yet been recovered. Detectives also identified the vehicle used in this crime as a red 2015 Jeep Grand Cherokee that was stolen earlier on Jan. 29 in San Jose and found in Morgan Hill around 10 a.m. on Jan. 30.

Inside the vehicle, police located property that had been stolen from an unlocked vehicle on Alma Street in Palo Alto at the time of the shooting.

On March 16, detectives arrested a 15-year-old San Jose boy who was the driver of the vehicle on charges of conspiracy, possession of a stolen vehicle, and accessory to assault with a deadly weapon (all felonies), as well as petty theft (an offense).

At the time of the arrest, he was in custody at the Santa Clara County Juvenile Center for an unrelated offense.

Police have not located the other two juvenile suspects – another 15-year-old boy and a 17-year-old man, both from San Jose – and are asking for charges to be brought against them for conspiracy (a felony) and petty theft (an offense).

The fourth suspect is an 18-year-old man from San Jose, and detectives are asking the district attorney’s office to review the case against him for the appropriate charges, which could include conspiracy, possession of a stolen vehicle, aiding and abetting. assault with a deadly weapon. , and small theft.

Mothers Against Murder, a local nonprofit, offered a $20,000 reward in the case. This reward remains unclaimed and is still available, should someone provide information leading to the arrest and conviction of the shooter. More information is available at mothersagainstmurder.org and 650-285-9221.

Police are asking anyone with information about this case to call the department’s 24-hour dispatch center at 650-329-2413. Anonymous advice can be emailed to [email protected] or sent by text or voicemail to 650-383-8984.