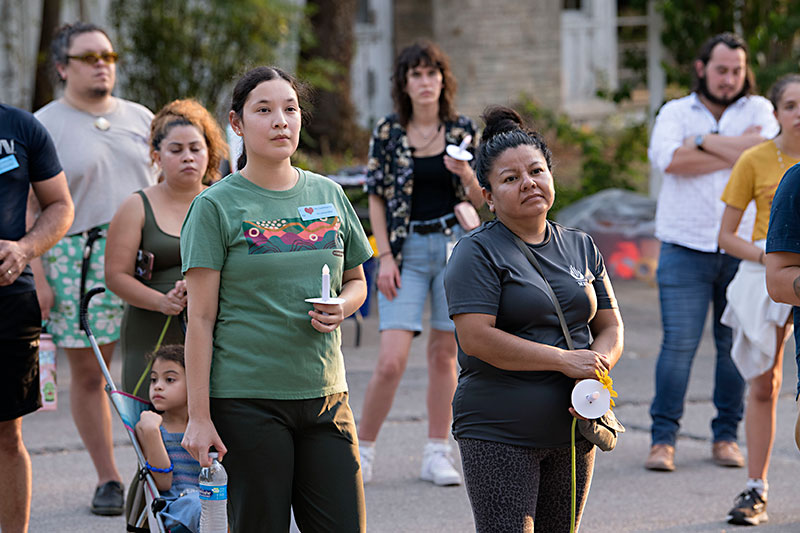 Troubles had been brewing for months Congress Mobile Home Park between Stassney and William Cannon in far south Austin when Maria Rosie Munoz heard a knock on his door. It was the building manager who told her she was being evicted. She had 60 days to vacate the premises. “I was in shock,” Muñoz said. “It took me a week to digest it and just – where was I going? What was I going to do? Honestly, I couldn’t afford to transition to an apartment complex. I live within my means.”

Muñoz struggled. The mobile home park where she had lived for five years was purchased in December by Paydar Properties, a La Jolla, Calif.-based, multi-billion dollar real estate investment and management firm that “focuses specifically on investing in undervalued and distressed properties.” On July 1, the last residents were informed that they had to leave. Muñoz has since moved her RV to a park on East Ben White Boulevard — and although her housing expenses have increased by $500 a month, living miles from her job as a cashier at Lowe’s and her neighborhood, she thinks always that she is one of the lucky ones.

Muñoz had only lived in the park for years, not decades. His motorhome was mobile. And even though she couldn’t stay in her neighborhood, she managed to stay in Austin. Not all of its neighbors have the same success. “Some of these homes have been there for over 30 years, so … they’re weathered and you can’t put them on the highway to move,” she said. “Maybe the ground isn’t great, the framing isn’t great – it’s fine to stay put, but put it on the highway? No.”

“This is an example of mass displacement happening, and another example of how the state prevents municipalities from intervening in situations like this.”– Board Member Vanessa Fuentes

The precariousness of the impending evictions hit home on July 23, when Greg Hopkins, a resident struggling to find new accommodation, died at his home in the park. Community members held a vigil for him last week. The park community has long been tight-knit, partly because of the longevity of many of its members, and partly because it had to be. Residents formed a tenant association to fight displacement in 2019 and succeeded. This struggle, however, proved more difficult. The new landlord is not looking to rezone the property, just to replace current tenants with better paying tenants, giving current residents little legal recourse against the move. The residents continued to organize, but the president of Paydar refused to meet with them. “He doesn’t like the look of these trailers,” Gabby Garcia of Building and Strengthening Tenant Action (BASTA) said of Paydar’s CEO. Reza Paydar. “He viewed these people as disposable.”

Member of the city council vanessa fuentes, who attended the vigil, noted that Austin passed an ordinance in 2016 requiring developers evicting low-income tenants to contribute to a relocation fund, but its implementation was blocked by the state of Texas. “This is an example of mass displacement happening, and another example of how the state prevents municipalities from intervening in situations like this,” Fuentes said. She said she was considering introducing a budget amendment on tenant resettlement support as well as a potentially broader mobile home preservation strategy, but time is running out with people being displaced daily.

Muñoz said she intended to stay in Austin after she was kicked out of the park, even though her daughter urged her to move to San Antonio. But she says she is increasingly concerned about what is becoming of the town she moved to in 1996. “We’re not going to have grounded people,” she said. “We can’t afford it.”

Do you have something to say ? The the Chronicle welcomes opinion pieces on any topic from the community. Submit yours now at austinchronicle.com/opinion.