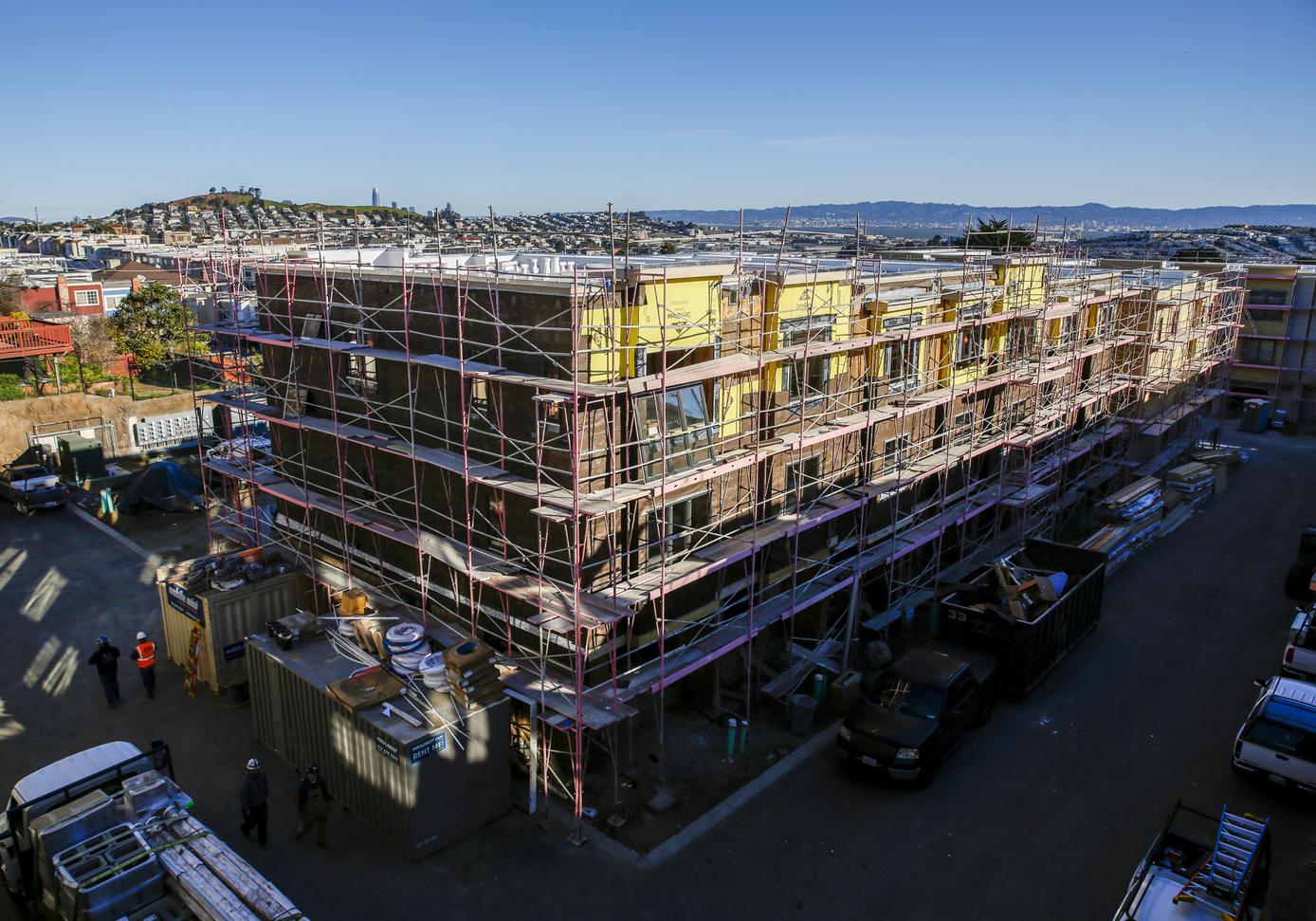 You might not notice it, but SF’s Portola neighborhood has its biggest housing project in 50 years.

Portola’s biggest subdivision in San Francisco in 50 years doesn’t tower over its neighbors or call attention to itself with flashy metal siding or a modern glass facade.

In fact, if it weren’t for the black “TRI Pointe” awning over the door and the comings and goings of construction workers, you might not know at all that you were walking past new dwellings. Its stucco exterior blends into the row of houses along Cambridge Street, a quiet residential road that connects Silver Avenue to the north and McLaren Park to the south.

What’s not obvious from the street is that the 56-unit Lofton at Portola development takes up most of the block, with three other buildings set back in the middle of the block on Yale Street. The 86,000 square foot plot – just under 2 acres – was previously part of the campus of Cornerstone Academy, a Christian school just south of the new housing.

The modest housing influx comes as the Portola – known as the Garden District for its history as a hotbed of flower growers – has become increasingly expensive, with the median house price rising 9% in over the past year to reach over $1.3 million. And there’s little inventory available – besides the new Lofton development, there are only two homes currently on the market, one for $1.5 million and one for $1.7 million. So far, 18 of the Lofton homes are under contract, with prices ranging from $1.3 million to $1.8 million.

During this time, the neighborhood has not seen the kind of development activity that has begun to produce more housing in the adjacent Excelsior neighborhood, where approximately 600 units are under construction. The only recent project built in the Portola has been a disaster – a development at 2869-2899 San Bruno Ave. was approved for 10 apartments, but was investigated by the city attorney after the developer illegally added 20 more apartments. The developer in that case was fined $1.2 million for dozens of code violations and is currently in negotiations with the city on how to bring the project into compliance.

The other proposed development in the neighborhood is on the site of the dilapidated wooden greenhouses at 770 Woolsey St. This 2.2-acre site has been approved for 62 units, but a neighborhood non-profit is currently raising funds to buy the property, rebuilding the historic greenhouses and transforming the property into an urban agricultural center.

Estate agent Kevin Birmingham said homes in the Portola are increasingly being bought by families priced out of Bernal Heights. Cambridge Street homes are expected to sell quickly, he said.

“There is no inventory and there is a strong market for new construction,” he said. “Those sleepy little neighborhoods like Westwood Park and the Portola are no longer overlooked.”

Birmingham recently listed a home at 485 Colon Ave. in Westwood Highlands, a residential enclave north of Monterey Boulevard. The house was listed at $2.49 million and sold for $3.6 million. The all-cash deal was completed in seven days.

“We had six offers between $3.2 and $3.3 million,” Birmingham said. “There’s so much money in San Francisco right now and so many buyers.”

“It’s a vibrant commercial corridor and an exceptional location for multi-family housing,” David said. “This is clearly a neighborhood where people want to live. We want to make sure we provide housing options for new residents. otherwise, we will see increasing displacement pressures on the existing community.

The Portola – the neighborhood is surrounded by the Bayshore Freeway section of Highway 101 to the east, Interstate 280 to the north and McLaren Park to the west and part of the south – is one of the most diverse in the city, with a population that is 55% Asian and 26% Latino.

The pandemic has been a mixed bag for San Bruno Avenue, which runs through the neighborhood along Highway 101, according to Portola Neighborhood Association board member Alex Hobbs. Some of the produce markets and restaurants flourished as more residents worked from home and spent more locally. But two of San Bruno’s famous new businesses – FDR Brewery and Churn Urban Creamery – did not survive.

While the extra housing density is welcome, Hobbs said, units may be too far out of the hills to have much impact on San Bruno merchants.

“What we really need is more housing in San Bruno,” he said. “I would be in favor of zoning if that’s what it takes.”

Buyers Justin Bishop and Jason Owyong were drawn to Lofton in Portola for its mix of urban amenities and open space. The couple, who work in Mountain View, had lived in a SoMa high-rise before buying a condo in a 74-unit building in Belmont. They missed the city but they wanted a place for their dogs, Ollie and Louie. They like being a few blocks from McLaren Park, and as a Singapore native, Owyong was drawn to San Bruno’s Asian restaurants and grocery stores.

“We love the vibe of San Bruno,” Bishop said.

Jeff Frankel, who runs TRI Pointe’s west coast operations, said he will continue to search for sites in the Portola. “It’s really hard to find infill opportunities the size of Lofton in established neighborhoods.”

Be part of the neighborhood you are in