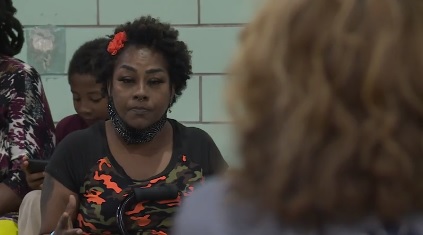 NORFOLK, Va. (WAVY) — Two days after gunfire broke out during a vigil in Norfolk over the weekend, local leaders want to take back the community, starting with Young Terrace.

Gunshots ring out at a vigil for Norfolk shooting victim

The housing complex’s administrative team held a meeting at the neighborhood recreation center on Tuesday to ask people how they can improve the community.

“I had friends killed in front of my face. Do you understand what I’m saying? So what’s the next step? When you go through trauma living hand to mouth in your own home in your own community,” one woman said, speaking to the management of Young Terrace.

Safety, mental health and more activities for the community were among the most important topics of the first group meeting since the pandemic put them on hold nearly two years ago.

Since the start of the new year, there have been 66 shootings in Norfolk, including seven in Young Terrace. Of the seven, two were fatal.

“It was imperative to have this conversation, to find solutions. I’m glad the tenants are out. Those who did, they spoke,” said Shannon Scott, who is part of the community administration team.

Those who came out called for cameras in the area to catch crime, more police presence on Whitaker Lane while children walk to school, and more community resources and activities.

“Kids need to feel like a kid and they don’t have that anymore,” said Shana Turner of Hampton Roads Mothers Against Senseless Murders.

Turner lost his own son to gun violence in December 2017.

“Everything they say is true, and that’s why, and in order to break the cycle, they have to come together,” Turner explained.

Next month’s meeting does not yet have a set date, but Young Terrace management said it will make the Hampton Roads Workforce Council and Mental Health Resources available to those interested. .

“Their voice matters. They matter and they need to voice their concerns and show them, show the city of Norfolk, that they are people too. They matter,” Scott said.